The plan includes new measures and over £230 million in funding to take action on domestic abuse in line with four pillars: pursuing perpetrators, preventing domestic abuse from happening in the first place, supporting survivors in getting their life back to normal and improving responses to domestic abuse across society.

The Plan was informed by over 180,000 responses from the Violence Against Women and Girls Call for Evidence and aims to directly respond to the concerns of survivors of domestic abuse.

The role of employers

The Plan makes it clear that a joined-up approach across society is needed to put a stop to domestic abuse. The Plan highlights the central role that employers can play in taking action on domestic abuse and calls on more organisations to join networks like the Employers’ Initiative on Domestic Abuse (EIDA) to tackle domestic abuse.

In recognition of the positive role employers can play in tackling domestic abuse, the Plan includes a pledge from the Department for Business, Energy and Industrial Strategy and the Home Office to hold roundtables with employers to consider:

The Plan also reveals that the Department for Business, Energy and Industrial Strategy is reviewing the current statutory leave provision for employees to assess whether this adequately supports those fleeing domestic abuse and will set out next steps later this year.

EIDA will ensure our members’ voices are represented at the roundtables and in the consultation on statutory leave.

The four pillars of the Tackling Domestic Abuse Plan

The Plan aims to reduce domestic abuse and the number of domestic homicides by improving Relationships, Sex and Health Education in schools, assessing the effectiveness of interventions to support children experiencing domestic abuse and increasing support for police forces with the highest rates of serious domestic abuse crimes and homicides.

The Plan recognises that no situation or survivor is the same and a tailored, individual approach is needed to support someone experiencing domestic abuse. The government is committing to increase funding for support services, including community-based organisations, Independent Domestic Violence Advisers and Independent Sexual Violence Advisers.

The Plan sets out steps which aim to reduce the number of repeat offenders and ensure perpetrators commit to long-term behaviour change. These include a review to understand what happens when domestic charges are dropped, increased tagging for those with domestic abuse charges leaving custody, consideration of a register of domestic abuse offenders and an increase in funding to address domestic abusers’ behaviour.

The Plan seeks to aid all of us in identifying and supporting survivors of domestic abuse to the best of our ability.

The Department of Health and Social Care is preparing a strategy to address the barriers survivors of domestic abuse face when interacting with health services (to be released this spring), the Home Office is reforming the Domestic Homicide Review (DHR) to source better data on domestic homicides and suicides following domestic abuse and the government is trialling the Ask for ANI codework scheme in Jobcentre Plus offices. These measures sit alongside an increase in funding to provide healthcare professionals with improved skills to respond to domestic abuse cases. 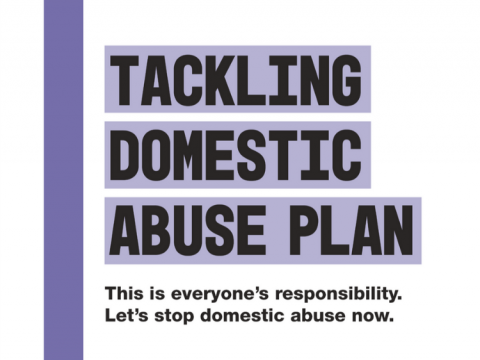